‘The Witness’, by Sidney Fraser 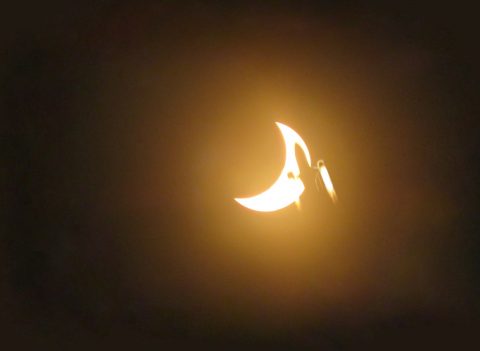 This science fiction tale by Sidney Fraser is the first short story ever purchased for our new SF/F fiction press imprint, Helium Beach.

Every part of the Geeking World we love and live in begins with a writer. We think it appropriate to dip our oar in the water and begin publishing our own original fiction for everyone to enjoy.

We hope you enjoy this first selection from new fiction author Sidney Fraser.

‘The Witness’, by Sidney Fraser

The escape capsule drifted through space, much as it had done for the past four days. Not that the days had much effect on Lyla. She simply drifted in and out of sleep, without much awareness of either state. At the moment she was staring dully at the small vessels control panel, or at least she thought she was. Her daddy had shown her the basics of working a craft like this last year when they’d taken the cruise around the rings of Saturn, but being a little girl, Lyla had been more interested in going back to the play area of the huge Star Cruiser. Now, all alone in the depths of space, the only thing that Lyla could remember was the O2 gage. And that wasn’t looking too good.

She supposed that she’d die out here. There was nothing she could do to prevent it. Even if she knew how to pilot the little ship, Lyla knew that it wouldn’t go far. Her daddy had explained that this type of vessel was meant to get you from a ship in orbit, down to the planet it was orbiting, nothing more. And there were no planets or moons nearby. As far as she could remember, she was currently somewhere between Neptune and Uranus. On her first day in the pod, she’d managed to locate the radio but had been unable to turn it on. Perhaps it was broken, like much had been on the small cruise vessel that her parents had hired for their holiday trip to Neptune.

They’d hired the smaller ship to have a more intimate family vacation. Her parents wanted she and her brother to spend more time paying attention to the sights in space as opposed to spending their days in the play area or arcade. The ship was an old one and Dennie had said that it looked like it was held together with duct tape and glue. Her parents had shushed him and reminded him that the ships captain and his wife lived and worked on this ship. Not everyone was so lucky to have a father that was the lead scientist of the Mars Two Colony and a mother that was it’s chief medical officer. Money didn’t grow on trees and some people had far less in life than what Dennis and Lyla had.

Well, now Lyla had nothing. Though emergency vessels like this were supposed to be stocked with food and water, the compartments for those were empty. Lyla hadn’t had anything to eat or drink for four days. She briefly imagined writing an e-mail to the Universal Commission about the safety violations aboard the vessel Bluebard and its emergency escape pods, but that only made her think about the Bluebard and what had happened aboard the ship. And Lyla did NOT want to think about that. She decided to take a nap instead.

She dreamed that she and her family were having a picnic on one of the dunes of Mars. They were protected by the colonies dome, but the sky was a vivid red, as it always was. Lyla had been born on Mars and to her, red was the color that a sky should be. On a visit to earth when she was seven years old, the blue sky had unnerved her and she’d been more than happy to go back home to Mars. She and her parents and brother were seated on a blanket and a mountain of food was spread before them, all of the food that Lyla most enjoyed. Dennie was happy and laughing, which was unusual because he was a teenager and rarely laughed at anything these days. He asked if she’d like to kick a ball around, and normally she would, because Dennie never wanted to play with her anymore. But she couldn’t leave the food. She took a huge bite of a roast beef sandwich and sighed in pleasure as she chewed. She could taste the beef and the horseradish sauce.

And suddenly she was in her bunk on the Bluebard. For a moment she was relieved. It had all been a dream, she wasn’t floating in space all by herself. She was in her bunk, where her mommy had tucked her in with Baxter, her teddy. Lyla smiled, she had the midnight munchies and she and Baxter could just go to the ships galley and get some of those cookies that the captains wife had baked earlier. But first Lyla was going to lay there and shake off that awful dream, and in the morning she was going to hug her parents, and even Dennie, and tell them she loved them. Suddenly a scream broke the silence and Lyla tensed.

She heard her father yell something and then heard her mother scream. Filled with dread, Lyla climbed out of her bunk, leaving Baxter behind. Slowly and quietly she crept down the narrow passage and up the stairs to the galley. Her mind didn’t want to understand the scene that her eyes presented. There was blood, a lot of it. There were her parents, but they were laying on the floor, not moving. There was the captains wife, also on the floor, also not moving. And then there was her brother, just now falling to the floor, and the captain standing above him. The captain was heaving for breath, like Dennie did after he ran a race at school. He had what her mind told her was ketchup splattered all over him and in his hand was something. A wrench? That was also covered in ketchup.

The captain made eye contact with her, but he didn’t look like the nice captain that had shown them around Neptune and had given her a lolly pop when they’d come on board his ship. She thought she heard Dennie moan but before she could look at her bother the captain had ordered her back to her bunk. He sounded like he meant business, so she had turned and gone back down the stairs. As she reached the bottom she heard a thump-splat noise that scared her and she started to run back to her bunk. Half way down the corridor she skidded to a stop and looked to her left. There, as in every vessel in the Universe, was an emergency escape pod, one of six for a vessel of this size. Without thinking, Lyla opened the hatch and scrambled inside. Not bothering to strap herself to the seat, she slammed her palm down on the large red button on the panel and was shot into space. It was then that she realized that she’d left Baxter behind and wished more than anything in the galaxy that she had her teddy to cling to.

Once the escape pod had cleared the ship by a good distance the acceleration had stopped, and the tiny vessel hung in space, facing the Bluebard. Shivering in fear, Lyla had stared at the ship for what seemed like hours and then, out of the blue, it exploded into a million pieces. That’s when Lyla started to cry and had, in fact, cried herself to sleep.

Now she awoke to a strange static noise and her first thought was space monkeys. Dennie had told her all about space monkeys, strange creatures that lived in space with no protective suits. Space monkeys latched onto unprotected ships and ripped them apart, leaving the human occupants to die a horrible death. Her parents had said that this was nonsense that her brother used to scare her, but Lyla wasn’t so sure. Again the static sounded and Lyla began to cry softly. She was too dehydrated to produce tears, but she moaned and rocked herself back and forth. Her mind was playing tricks on her, because she thought she heard voices and Dennie hadn’t said anything about space monkeys being able to speak. But slowly her mind focused and she knew that she could actually make out voices. The voices were coming from the radio, which wasn’t broken after all.

‘Emergency Vessel, this is the freight vessel Theodore, please respond. Over.’

Lyla simply stared at the radio.

‘Emergency Vessel, this is the Theodore, if anyone is on board, please respond. Over.’

It took several more hails from the Theodor for Lyla to reach out to the radio and press a button.

An emergency escape vessel from the destroyed ship Bluebard has been found four days after the disaster in space. The escape pod was picked up by a Trans-solar freighter called the Theodore, and in the pod was the second survivor of the Bluebard found this week. The captain of the Bluebard, Martin Nettle, was picked up just hours after the explosion that destroyed his ship. Captain Nettle had been hailed as a hero after he described trying to get his wife and passengers safely off of the vessel after noticing that the ships drive core had heated beyond the cooling point overnight. Nettle said that before he could reach the passage containing crew and passenger cabins, an explosion rocked the ship and that he had no choice but to abandon ship in an emergency escape vessel. According to Captain Nettle, there were no other survivors.

This version of events was contradicted yesterday when Lyla Anderson, 10, was found in an escape pod near the site of the tragedy. After several hours of re-hydration therapy, Miss Anderson was able to give her account of the Bluebard disaster, stating that Captain Nettle had murdered his wife and the Anderson family. Miss Anderson escaped into an emergency vessel before the same fate could befall her.

When confronted by the Universal Police Force with this information, Nettles confessed to his crimes. When asked for a motive, he reportedly claimed that he had only meant to kill his wife in order to gain an insurance settlement, but that Mr. Anderson had caught him in the act. At that point, Nettle felt that he had no alternative than to kill all those aboard the ship. He assumed that Miss Anderson would die in space because that particular emergency escape pod had no supply of food or water and that the radio only worked when hailed. Nettles was arrested and remains in custody on space station 21B, and faces four charges of first degree murder.

Miss Anderson remains under doctors care until her aunt arrives to take her to Earth to live with remaining family.