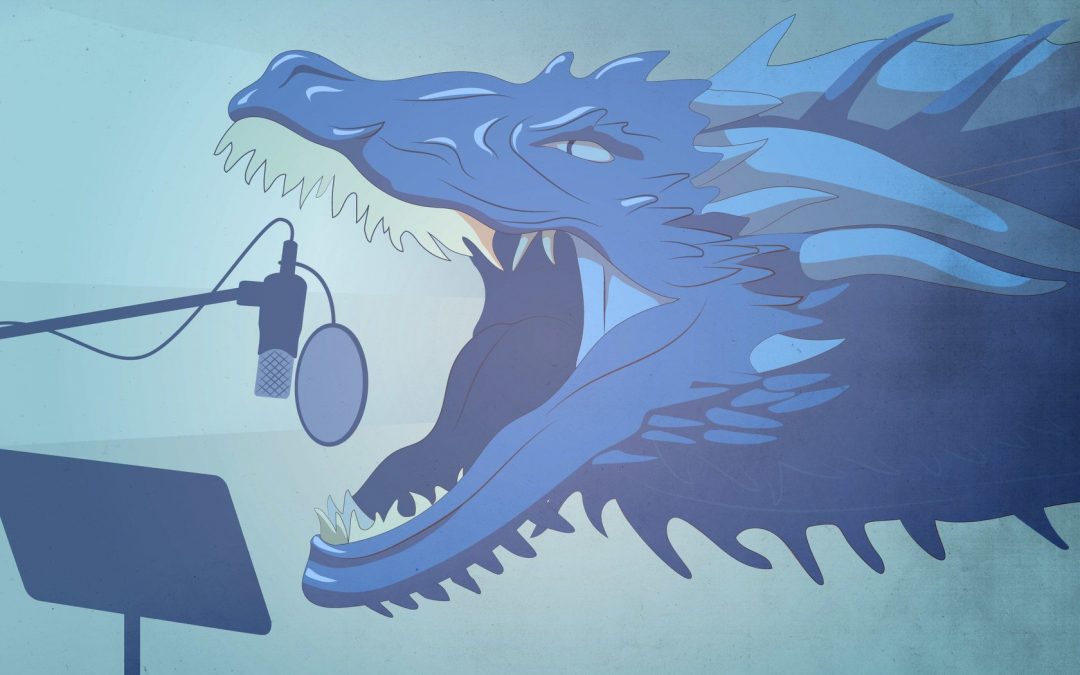 When you hear the voices on radio and for animated films and TV shows, you never know where that voice might be coming from. This new story by Thaddeus Howze explores what happens in one of the more extreme situations. Enjoy.

Live, before a studio audience.

“Murray. Murray. The people are ready for the truth.” The voice came from a dark corner of the studio, yet it carried through the air, silken perfection. Crisp, yet fluid. Enunciation split the air like the flash of a diamond, glittering impossibly bright. This was a voice of an angel. A sputter of light lit the impossible, for just a moment. Something too horrible to believe. Before it sat a studio mike and a script stand. Then everything was dark again.

“Ready? Are you out of your mind? No one, and I mean no one is ready to see you walk out on stage and say: “I would like to thank the academy…” Murray, normally a phlegmatic fellow, more likely to fall asleep than to finish a sentence, his current explosion was as unexpected as finding a forest fire in your refrigerator. Spit was flying.

There was a pause. Murray found himself leaning forward, waiting for a response. So addicted he had become to the Voice, the expected berating was as welcome as wine to the beggar. “Now, Murray, remember your blood pressure. I can only do so much. What is the harm in having me take my award in person? People will discover dragons exist? Hell, how would that be a problem?”

“Umm. Yes, we do. You and I have worked together for a dozen years now. I have existed that entire time.”

“Yes, you exist. But you said you were one of the last and this makes you endangered. Surely exposing you to the world might make you even more endangered or even extinct. What if people become afraid of you?” Murray had slid into the darkness and made his way over to the dragon hidden there. Anything to be closer to his Voice.

“You people love us. Every one of your mythologies talks about us, your stories are filled with us, and I love reading about us from your perspective. Except for the Dragon and the George. Those stories are patently untrue. Who could imagine a story where men kill dragons. Murray, could you imagine that?”

The proximity to the dragon caused a second reaction in Murray, the natural reaction when prey is entirely too close to the predator. Fear. Pure terror. The hot breath. The shining teeth, long as swords, lit from behind by the barely contained fire within.

Murray was most certainly afraid. Afraid his meal ticket might leave. Afraid that after a decade of selling books, producing an award winning audio podcast, he would be forced to go back to living on residuals and hiding in his parent’s basement. He couldn’t go back to that. He just couldn’t.

His fear became rage. He ran up to the dragon’s face which had been twisted downward to the microphone. “You agreed to this. You said I would be your face and you would lend me your Voice. We would make money and you could lay your egg. You have your gold. You have your egg. Now you want to go on stage and ruin this one thing for me? This is all I have.”

The dragon looked at Murray. He tried to remember when he met him a decade ago. He had filled out. He was better dressed and smelled a thousand percent better. But it was his state which allowed Him to cross over. To free the dragon from his prison of Imagination.

Without Murray, he would be relegated to bad cinema and children’s stories. Murray was his everything. “Okay, Murray. I know you’re right. Watching you get awards always looks like so much fun.”

“And don’t I always bring you back something nice?”

“What do you want this year?”

“The Norwegian actor getting the Best Picture Award.”

“It’s another market. He’s a native of Norway, yes?”

“Fine, this will be the last one. You should be able to speak almost fifty languages by now. The only way you get any more is if we win a Hugo.”

“Now that you mention it, now that the last one has settled, I suspect I can feel a story percolating. Break out the voice software, I think I have something you can use. Don’t forget my snack.”

Murray Draper, award-winning voice actor. With a stunning array of magnificent voices and comedic timing, he appeared on the scene winning every kind of acting award there was. There was always a question of famous actors who disappeared after he became friends with them, but no evidence of foul play was ever discovered.

At the end of his thirty year career, he was credited with having over two hundred unique voices in his repertoire, voices which reminded people of some of their favorite actors who were gone too soon.

Hot on the heels of his Draper’s death, came a new vocal talent, a young man, a local, who claims the waterfront made him what he was today. Calling himself Junior, his was a voice unmatched by anyone but Draper himself.

His ‘Murray Draper’ impression was impeccable.